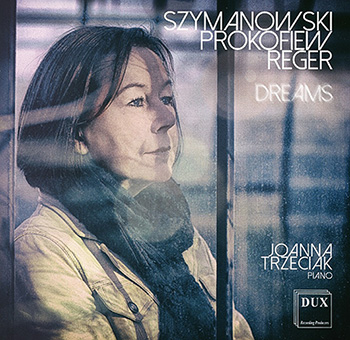 Trzeciak is a pianist with a strong personality. She does not get lost in virtuoso themes or thundering fortes — instead, she takes us on a journey to the deepest depths of the composer’s soul.

GB > Joanna Trzeciak was born in Krakow where she began her musical training at the age of 7 under Professor Zbigniew Drzewiecki. Following this, she received her diploma in piano performance at the Warsaw Conservatory under Professor Jan Ekier. During this training, she was awarded a scholarship by the Chopin Foundation.

In 1977, she was selected by the Polish Ministry of Culture to specialise further at the Moscow Conservatory under Professor Lev Vlasenko. Her collaboration and friendship with Irina Rumiancewa have had a crucial influence on her artistic development.

In 1980, she won the Festival of Polish pianists in Slupsk. Following this, she embarked on an international career.

In November 1988, she launched her first concert tour in the United States. She has returned regularly since then, not only to perform in concerts but also to give master classes at various American universities.Her favourite teaching matter remains Szymanowski’s complete works for piano. In addition, she has performed in almost every European country, as well as in Canada, Argentina, Brazil, Uruguay, Israel, Egypt, Kazakhstan, Azerbaijan, Turkey and Lebanon, both as a soloist and with an orchestra.

In chamber music, she has worked alongside Philippe Hirshhorn, Lola Bobesco, Anatoli Krastew, Jadwiga Gadulanka, Virtuosi di Praga, the Panocha Quartet, the Rimsky-Korsakov Quartet,Silesian Quartet ,Urszula Kryger, among others. Joanna Trzeciak has a significant discography. After recording LPs in Poland, Germany and Belgium, her first CD of works by Szymanowski was released by Pavane in 1990. In 1993, a new edition was released which included Chopin’s Rondos. In 1997 and 2000, Joanna Trzeciak released two remarkable CDs with works by JN Hummel. These recordings enjoyed international critical acclaim and received several awards including five Diapasons.

In 2007, she released the album featuring music by Rachmaninoff and Chopin with Spanish label KNS.

In 2017, Joanna released two new albums on Polish label Dux. The first consists exclusively of works by Beethoven: the Six Variations, Op. 34, the Sonata “Pathétique”, Op. 13, and the Sonata Op. 109. The second album is titled “Dreams” and contains works by three composers dating from 1915, 1916 and 1917 — three war years. The title “Dreams” is based on Max Reger’s “Träume am Kamin”, Op. 143. In addition, the album contains two monumental works from the same period: Prokofiev’s twenty “Visions Fugitives”, Op. 22, and Karol Szymanowski’s “Masks”, Op. 34.

In October 2010, she received an ‘Award of Merit’ from the Polish minister of culture.

She is the artistic director of the Chopin Association of Flanders and the ‘Pianotune’ festival.

Joanna Trzeciak is an intelligent pianist and has the necessary qualities to become a concert artist of international renown. These qualities are: impeccable taste and a natural and authentic musicality. The technique she possesses allows her to perform a wide range of repertoire.
I have to emphasize that she shows a clear predisposition towards performing the music of Slavic composers: Chopin, Rachmaninoff, Prokofiev etc.
And one more quality important for contemporary artists – she’s got a well developed sense of self-criticism. This proves that the artist takes her profession seriously and makes for a brilliant career. (Lev Vlasenko)

An artist with class, possessing a brilliant technique allowing for nuances of expression, with great attack control and refined pedal usage, creating an atmosphere full of delicate and changing colours… (“Messagero Veneto”)

The pianist communicates Chopin’s pure and fascinating intention in an impressive manner. Most of all, she possesses a precise, flowing sound which is alive, and that is the greatest charm of her playing. One should also take note of the phrasing, having great elasticity of expression and a very valuable rubato - refined and natural at the same time.
(“CD Classica”)

Joanna Trzeciak possesses dazzling technique, impressive taste and plays in a way that leads one to consider her one of the best interpreters of Chopin. It is vigour (brio), class and grace in pure form…. (“La Dérnière Heure”)

J. Trzeciak possesses an energy which allows her to communicate most diabolical of qualities. At the same time, she respects the rhythmic coherence and elegance of phrasing, and measures out a variety of sound contrast (her velvet pianissimos are of staggering beauty). The pianist colours her repertoire with delicacy and endless lyricism, drawn from her excellent knowledge of the works of her compatriot – Chopin. (“La libre Belgique”)

It is rare to hear a sound as rich as the one bursting from the piano when played by Joanna Trzeciak. Coming from the land of Chopin, she gave a recital of vivid sensitivity and extreme precision at the Assembly Hall...
(“L’Orient-Le-Jour”)

In the monumental “Wanderer” Fantasy, the beautifully carried narration, romantic expression, and the beauty of phrasing and sound were the source of true satisfaction (“Gazeta Wyborcza”)

F. Mendelssohn’s First Piano Concerto, played by Joanna Trzeciak, was fascinating. With a visibly high level of concentration, she not only played the piece with precision, but also created an interpretation that accurately conveyed the nuance-filled and open world of Mendelssohn’s music (“Badische Neueste Nachrichten”)

…..I thought this woman has no blood in her veins but only music and I envied her the closeness to the music she played. She made the music her own, she was offering herself. (“Bellapais Journal, North Cyprus”)

Trzeciak is a pianist with a strong personality. She does not get lost in virtuoso themes or thundering fortes — instead, she takes us on a journey to the deepest depths of the composer’s soul.
(“Dnevnik” Novi Sad )

How one should play Beethoven was simply demonstrated through her interpretations of two works from the composer's oeuvre: the Six Variations Op. 34 and Piano Sonata Op. 109.
“Vogtland Anzeiger”

Trzeciak played Prokofiev's “Visions fugitives”, as well as Beethoven's lyrical late sonata Opus 109 and Chopin's highly dramatic Polonaise in F-sharp minor, in an impulsive fashion, with a bold and often almost explosive approach, throwing the full weight of her personality into the balance.
(“Freie Presse” Chemnitz)

Particularly noteworthy is the performance of the third part of Sonata in E major Op. 109, which is one of the technically most difficult pieces in the canon. The growing dynamic of the piece with the parallel intensification of the rhythm is a trap into which many virtuosos have fallen. It is worth discovering the grace and natural beauty with which Joanna Trzeciak plays this piece.
(“LongPlay “ Poland)

The ” Dreams” album is a brilliant, conceptually complex recital of one of the finest contemporary pianists.
(“LongPlay” Poland )